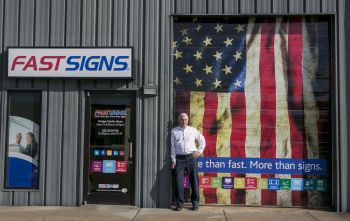 Is there another way for small cities and towns to achieve economic development and attract investors to create jobs? A new trend suggest there is.

After navigating the corporate world working his way up to lead an organization, Stephen ‘Steve’ Kouroupas decided to opt for a change of pace. Making the decision to leave the corporate world early, he took on another task, buying a printing business and opening a FASTSIGNS located in eastern North Carolina.  He chose Greenville, NC, a small, but growing, metro area with a university and regional medical center located a short drive from somewhere near and dear to his heart – the Outer Banks.

Kouroupas started his career working for Westvaco, a paper company, specializing in fine paper, packaging, and envelopes. After the merger of The Mead Corporation and Westvaco, Kouroupas managed the office product section as a channel manager working with large office supply stores like Office Max and Staples. He then moved on to Cenveo where he focused on commercial printing from digital print management to web commercial printing.

From there he accepted a position as division President with Quality Park Products, a division of Cenveo. And finally, the day arrived that Steve decided it was time to do something different; opt for ‘early’ retirement and re-enter the business world as a small business owner. “I always wanted to own my own business. I had a lot of my friends that did that,” said Kouroupas. He further explained, “It got to a point in the corporate world where the pyramid gets very narrow at the top.”

Philadelphia born and raised, Kouroupas carefully searched multiple places before deciding to relocate to Greenville. He and his wife thought about moving back to Philadelphia or to the Outer Banks of North Carolina since they had been vacationing there for several years.  They considered buying businesses in both areas, but after no success, began looking towards franchises and decided FASTSIGNS would be a good choice.

FASTSIGNS corporate allowed him to pick a location and suggested several locations including Durham, Greenville and several other locations in eastern NC. Steve and his wife set out on many road trips with Greenville fulfilling all the qualities they had hoped to find.

“Greenville was by far and away from all aspects, better than all the other markets, in terms of the exuberance exhibited by the business community, the chamber of commerce, and the support network that was out there for businesses,” said Kouroupas.

Kouroupas said he approached several banks and chose a small, community bank – Albemarle Bank & Trust.  “I enjoyed working with them and they made it relatively easy to do the financing,” Kouroupas commented.

It’s tough to do a start-up business and Greenville provided Kouroupas with what he calls the ingredients for success. This area had availability of labor, availability of customers and a growing economy. And it was near the coast so it would be easy to make their trek to the beach when they wanted to relax.

Many factors played a role in his ultimate location.  He looked for a place where his employees would want to live and be content. Kouroupas’ corporate background helped him make business decisions where he knew growth could happen.

Just two days before Christmas, Kouroupas’ dream would finally become a reality when he closed on the purchase of an existing printing business in Greenville and began converting it to a FASTSIGNS center.  He would now be a FASTSIGNS franchisee with the added perk of being his own boss.  Steve is now underway with some renovations and preparing for a ribbon cutting.

Eastern North Carolina, and specifically Greenville, represents the next phase of development in the North Carolina market.  With its unique combination of available labor, proximity to the ports, burgeoning infrastructure, and a vibrant and energized business community, it’s an ideal place to both live and work.

Realizing an opportunity to assist individuals like Steve, the NCEast Alliance is developing a program that will focus on marketing the region as a viable location for early retirees seeking to become entrepreneurs.